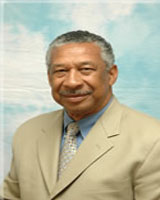 Rev. Dr. Eugene H. Marzette, an ordained minister, received his education at California State University Fresno, his Master of Divinity and Doctorate degrees from Friends International Christian University in 1976. He became an associate minister under watch care since 2015 serving on a number of Ministries including Evangelism Team leader.  He is a longtime faithful member of Trinity Baptist Church in Los Angeles where he became an associate minister in 1986. Dr. Marzette serves as the community relations Liaison for the Los Angeles Police Clergy whose primary purpose is to organize communities to eradicate gang violence, and as a board member representing Trinity Baptist Church on The Jefferson Park Improvement Project. Dr. Marzette is also Co-Chairperson of Trinity’s Board of Christian Education.